The International Conference of Legal Regulators (“ICLR”) network remains to this day the only platform for legal services regulators to discuss issues and trends relevant to our unique perspective as regulators of lawyers. At the annual ICLR, legal services regulators from participating jurisdictions are able to share knowledge and best practices, learn from each other and engage in wide-ranging discussion and debate.

In 2017, the ICLR was held in Asia (in Singapore) for the first time, on 5 and 6 October 2017, spurred in part by the desire to extend the reach of the ICLR network in this part of the world and to encourage jurisdictions in this region to join this community of international legal services regulators.

As a result, the ICLR 2017 saw representatives from eight new jurisdictions, namely Guam, Kenya, Malaysia, Myanmar, Nigeria, Qatar, United Arab Emirates and Vietnam. There was also broader representation from countries such as Australia, Germany, New Zealand and the United Kingdom. 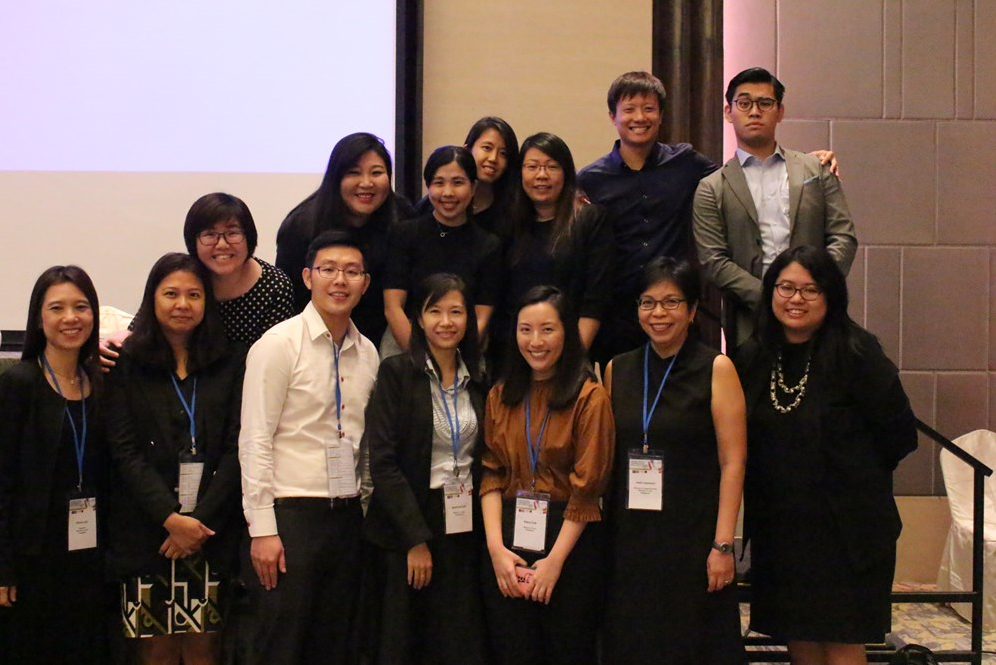 Organisers of ICLR 2017 from the Ministry of Law, Singapore and The Law Society of Singapore

In keeping with our objective, the theme for the 2017 conference was “Legal Regulation in a Borderless World: Building Networks”. An early challenge that we faced in organising the conference was selecting topics that we could be confident would appeal to the increasingly diverse community of legal regulators. As a result, we took the decision to depart from past practice and launched an open consultative process with all who indicated an interest in attending the conference, to reflect the views of new and mature regulators, as well as those from very different legal traditions.  We received ample feedback, which enabled us to play a curating role in selecting the final topics. Keeping the process as open as possible, we invited all who were interested in contributing as speakers to come forward and worked with the volunteers to settle on the modality of their sessions, and to fill any gaps in their panels.

We are pleased that through this process, we were able to ensure that the conference covered a broad range of current and emerging issues. The table below recaps the topics which were discussed across both days of the conference. The materials for the various sessions can be found on the ICLR portal.

And so it began…

The welcome reception before the official start of the conference was held at the Supreme Court of Singapore on the evening of 4 October 2017, with a welcome address by Judge of Appeal Steven Chong. This customary social event afforded time for the ‘regulars’ to catch up with one another in an informal setting, and to meet new participants. Attendees also had an opportunity to tour the Supreme Court building and learn about Singapore’s legal history. 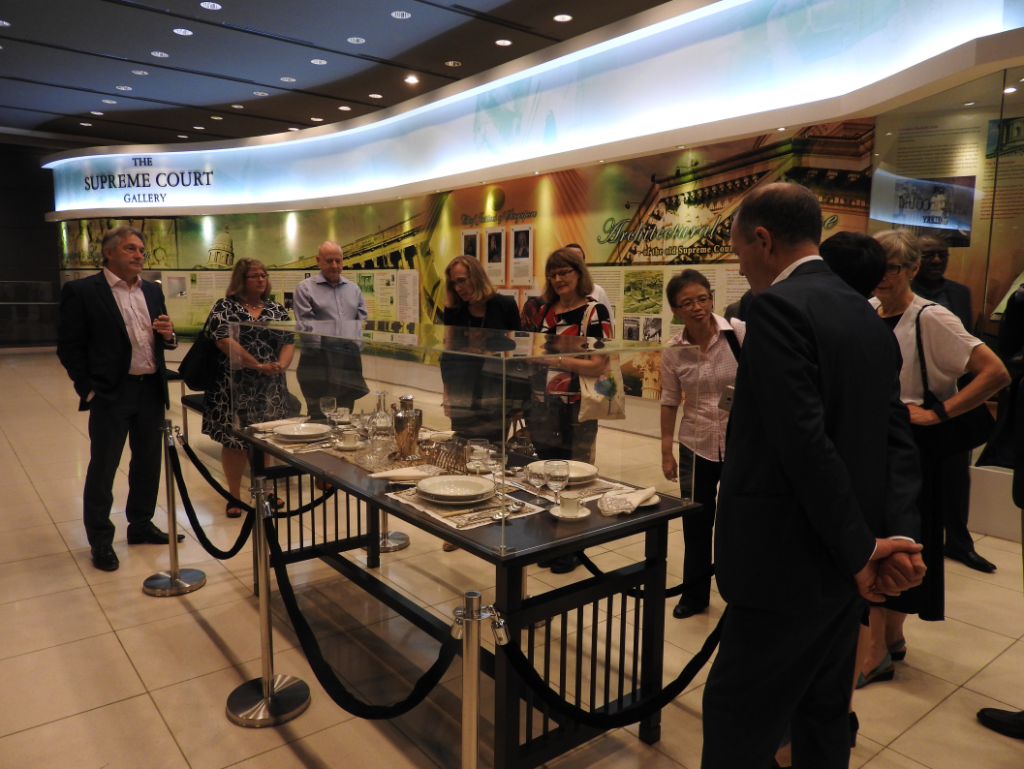 Tour of the Supreme Court of Singapore 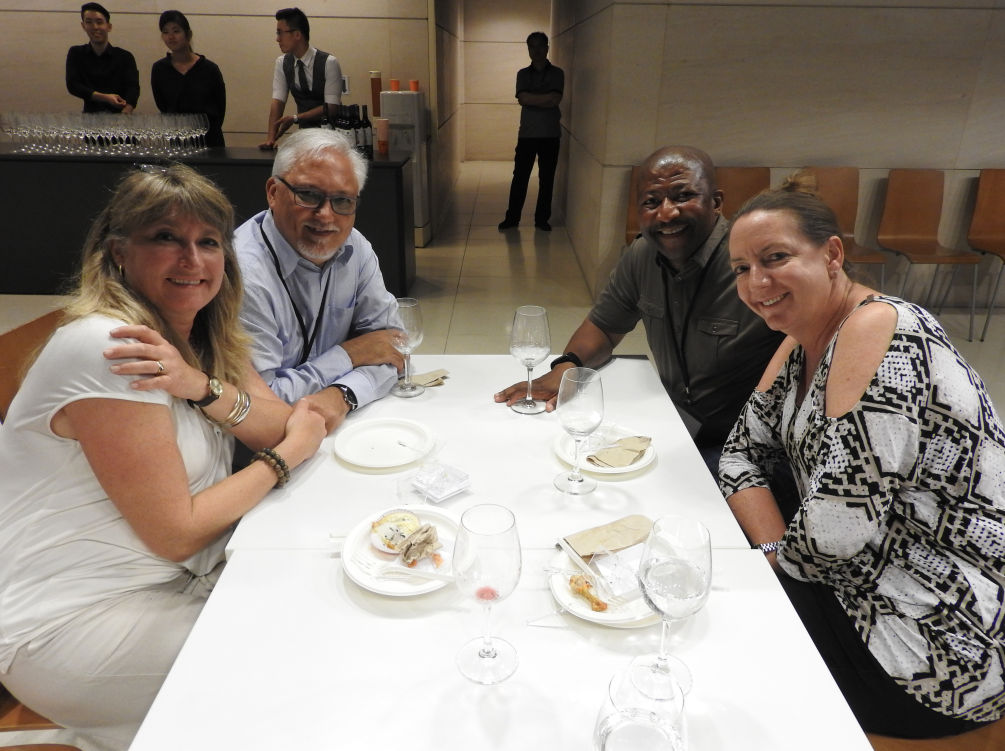 Welcome reception at the Supreme Court of Singapore 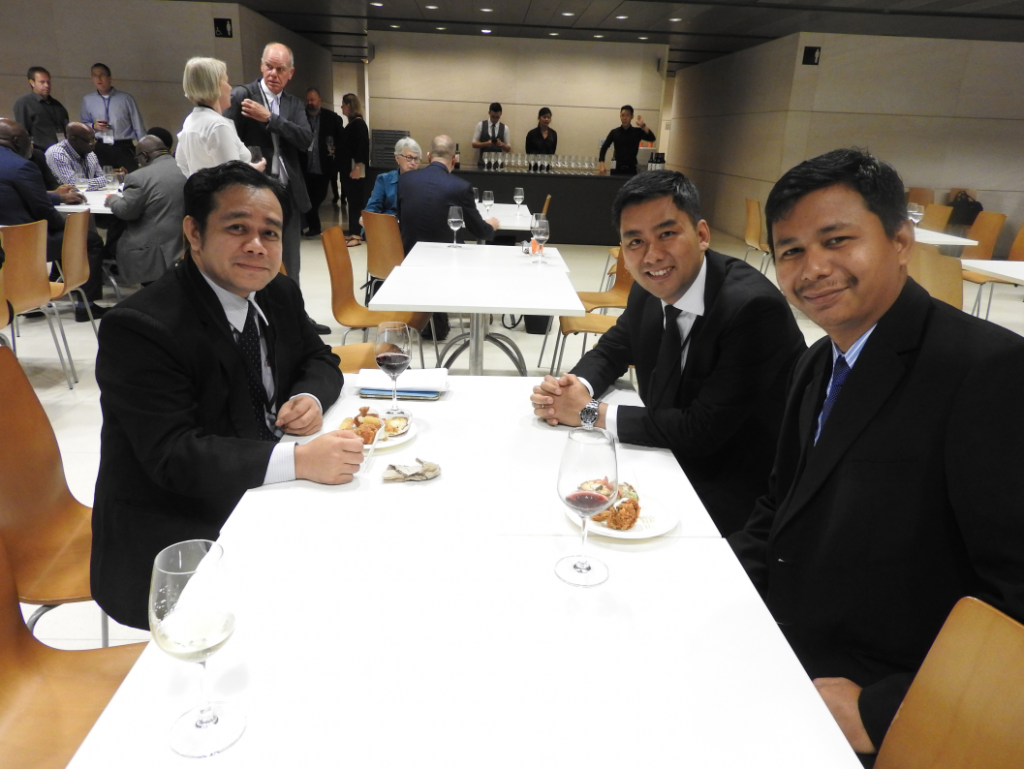 Welcome reception at the Supreme Court of Singapore

The conference kicked off with a keynote address by our Senior Minister of State (“SMS”) for Finance and Law Ms Indranee Rajah SC. Her wide ranging address described the evolution of legal services regulation in Singapore before touching on the current challenges facing legal services regulators the world over. Ending on a positive note, Ms Rajah encouraged those present to embrace the opportunities that globalisation and innovation can bring to the legal services industry and which consumers can benefit from. Regulators today must strike a balance between safeguarding and protecting the public interest and encouraging innovation to keep pace with technological advancements. 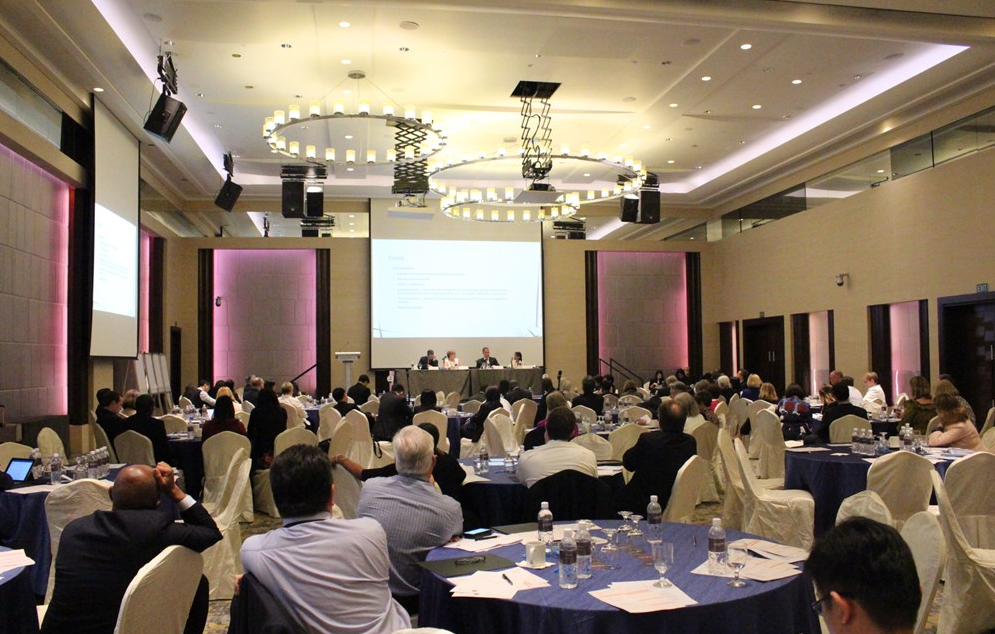 The panel sessions and discussions have always been a highlight of past ICLRs and the 2017 edition was no different. To provide greater opportunity for audience participation, we introduced the use of the Pigeonhole Live app. The app enabled the audience to submit questions “live” during and after panel presentations, and also enabled the audience to “like” questions they wanted to see discussed. This enabled the moderators to gauge the audience’s interests and to give priority to the most popular questions. Seeing the questions streaming in and moving up or down the list as everyone quickly got the hang of how it worked added a novel and lively element to the conference sessions. 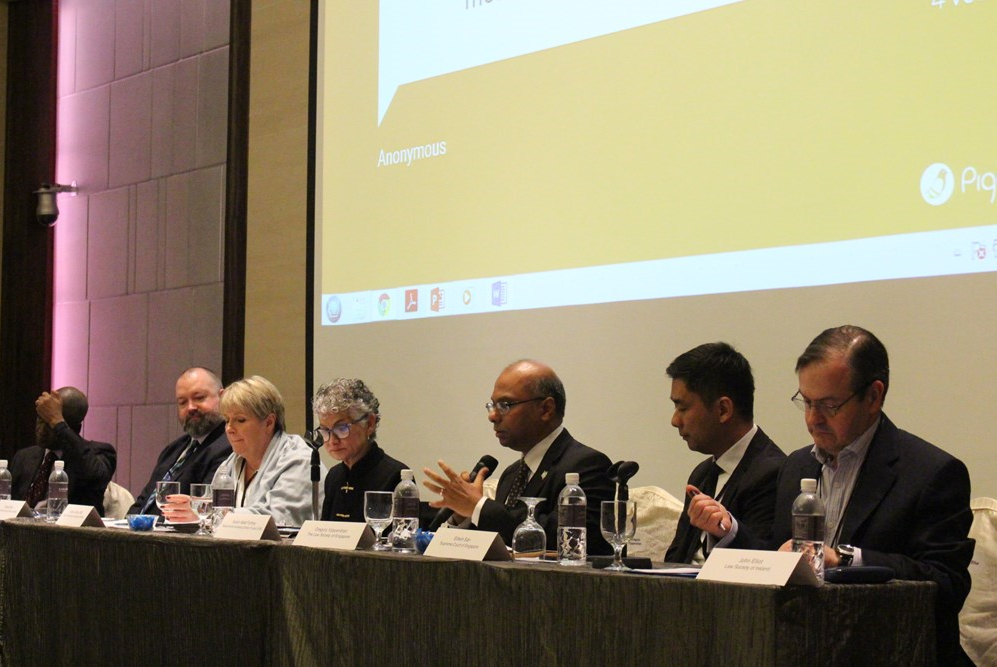 At the end of Day 1, the delegates made their way to Gardens by the Bay, where we celebrated a fruitful first day with a seafood dinner followed by a tour of the world’s largest glass greenhouse. We hope that those who did the tour enjoyed the conservatories and the iconic Supertrees! 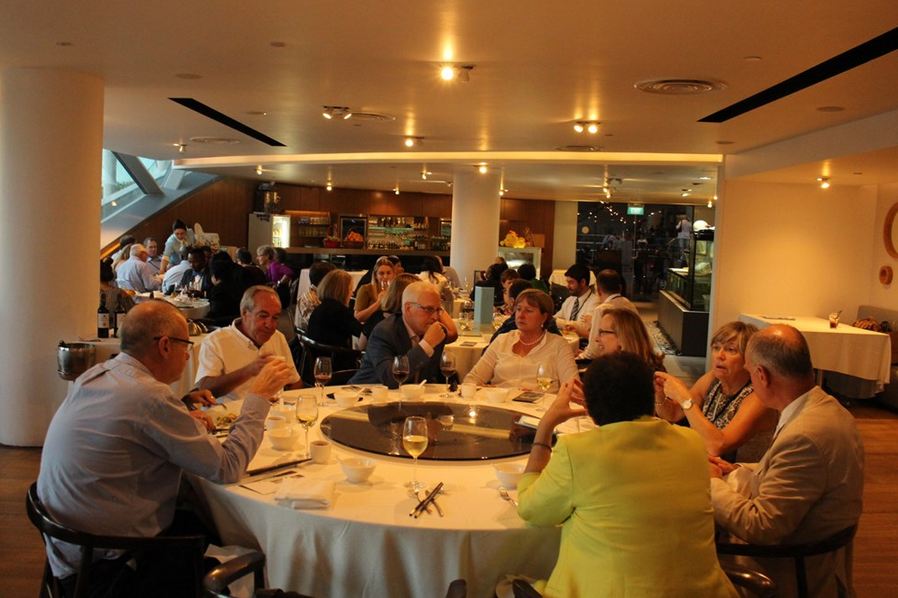 Dinner at Majestic Bay Seafood Restaurant at Gardens by the Bay

Day 2 kicked off early with a pre-conference guided walk around Singapore’s arts and civic district. Participants got to hear about the history behind a number of historical sites and iconic buildings along the route. 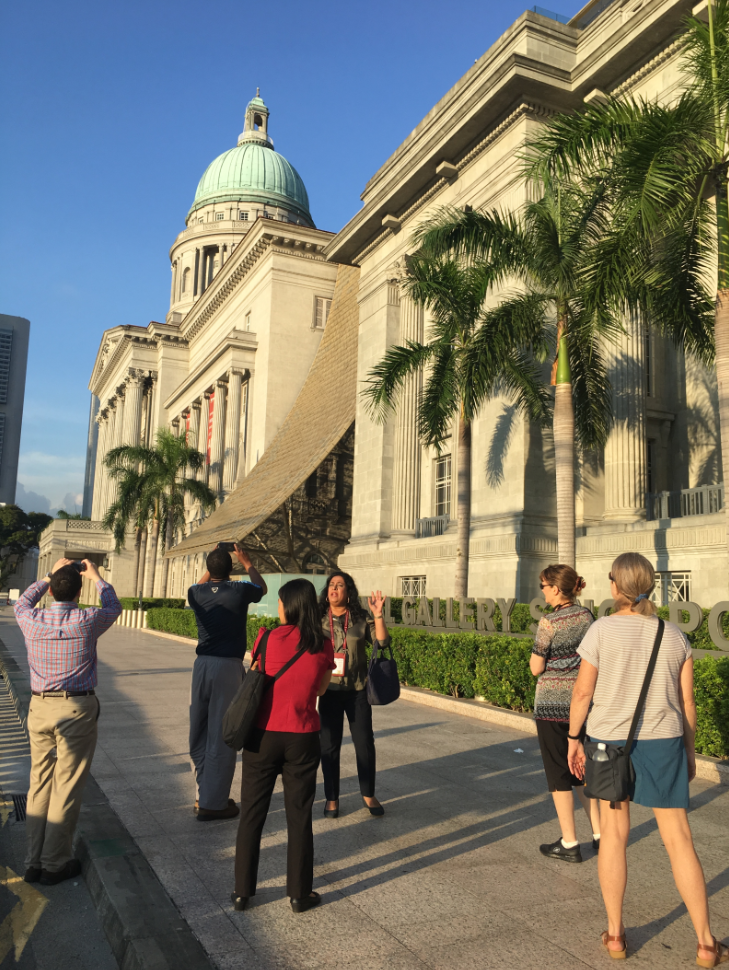 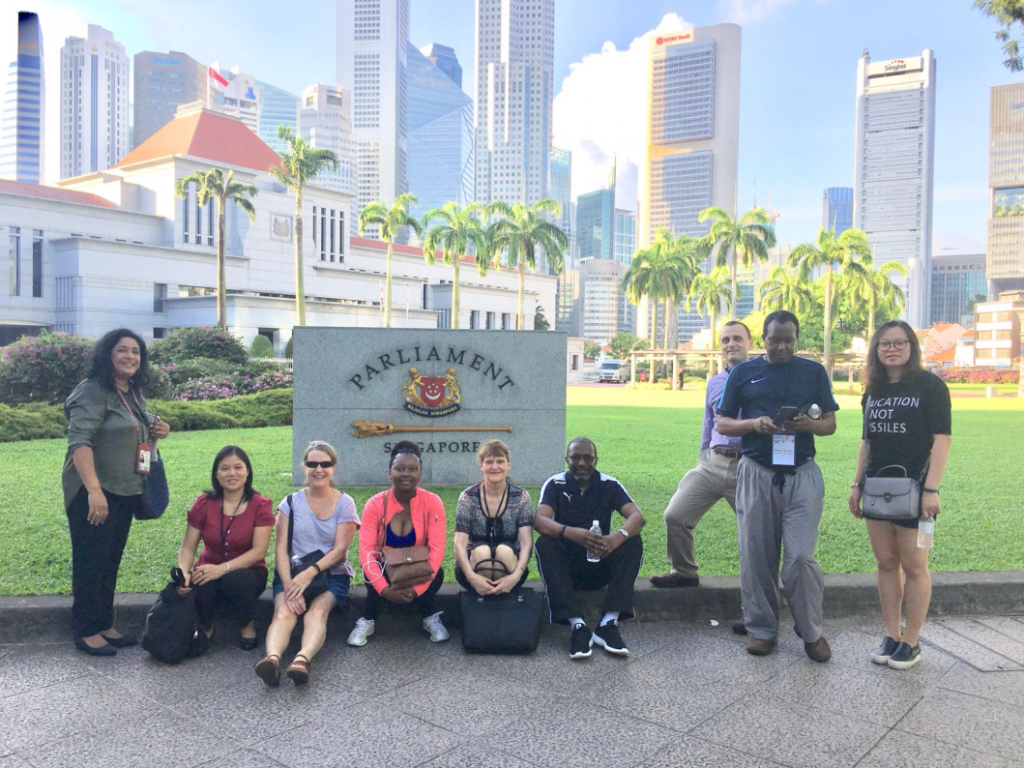 Back at the conference venue, Day 2 opened with an address by The Lord Keen of Elie QC, Advocate General for Scotland and Spokesperson for the Ministry of Justice in the UK House of Lords. Lord Keen discussed the success factors that led to both Singapore and London’s emergence as premier centres for litigation and arbitration worldwide, namely, legal certainty, a pool of outstanding lawyers and recourse to a respected judiciary. As a legal services regulatory body, we were certainly proud to hear this!

Opening address by The Lord Keen of Elie QC, Advocate General for Scotland and Spokesperson for the Ministry of Justice in the UK House of Lords on Day 2 of the Conference 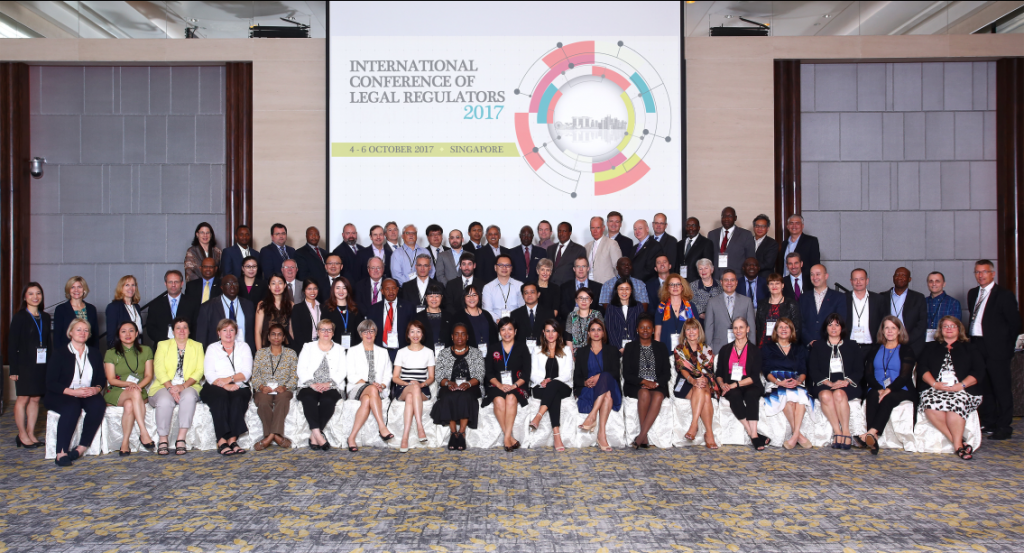 A word of appreciation

It was both a pleasure and a privilege to have been given the opportunity to host the ICLR in Singapore. We would like to thank all who participated and spoke at the sessions for so generously contributing their expertise and time for free and paying their own way. This financial model enables the organisers to keep the conference fees affordable and ensures that the conference can be self-funding and self-sustaining. We thank everyone who joined us in Singapore for ICLR 2017. Ultimately, your support and participation was what ensured the ICLR’s success. Finally, for those who did not obtain a copy of the group photo, please feel free to write to us at ICLR2017@mlaw.gov.sg to get one.

For those who were not able to join us in Singapore, we hope that you will be able to attend this year’s conference in the Netherlands. We are confident that the dialogue amongst the legal services regulators on current issues in legal services regulation will continue at ICLR 2018 and we wish the Netherlands Bar Association every success in organising the conference.

This article was contributed by the Ministry of Law, Singapore.